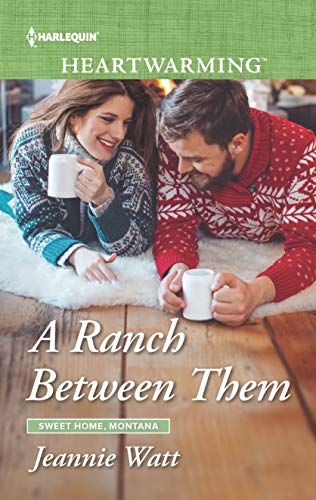 I am so pleased to announce the release of the first book of my Sweet Home, Montana series, A Ranch Between Them.

This is the story of Katie Callahan and Brady O’Neil. Brady and Katie’s brother were best friends in high school and Katie had a mad crush on Brady. Brady’s home life wasn’t the best and he didn’t feel like he was worthy of Katie, so he kept his distance. Time passed, as it does, and they went their separate ways–Katie to a corporate career in the city, and Brady to the rodeo circuit.

When the story opens, Brady’s suffered a career-ending injury and and has signed on to manage the Callahan Ranch while he heals, unaware that Katie, tired of city life, is coming home to stay. (I just love doing things like this to my characters.)

This scene is from the first chapter of the book, after Katie has rescued Brady from an ATV accident–something he would have been able to do himself had he not been inured.

After parking the truck next to the main house, Katie half expected Brady to bolt—or to come as close to bolting as he could with his injuries, both old and new—but instead he turned toward her and regarded her for a long moment from under the brim of his ball cap, giving her a moment to study him back.

He’d been good-looking in high school, but now he bordered on spectacular with his dark hair and green eyes. The planes of his face had become more pronounced with age, as had the laugh lines around his eyes. She doubted that Brady had laughed a lot lately, but the lines made her realize how much time had passed since they’d seen one another. They’d both aged, changed. They weren’t the people they’d once been.

The candid admission startled her. Brady O’Neil admitting weakness. Brady, who’d refused to go to the clinic. Brady, who’d never let on that his parents were not the loving parents they appeared to be. Nick had clued her in on that small fact.

“Hurting inside or out?” She half expected him to pull into himself after she asked the question, refuse to answer or deflect the question. He didn’t.

“Out.” His jaw shifted sideways, and he sucked in a breath before saying, “Both. Which is why I need my space. Maybe, before I go, I can explain everything. But for now…” He made a frustrated gesture. “Like I said, I need my space.”

“Do you think I’m going to try to mother you, or smother you or something to that effect? Because that isn’t the case. I’m here to sort my life out, too.”

There was color in his cheeks. This wasn’t easy for him, but now that he knew she was going to be sharing his domain, he was establishing boundaries. Like she would encroach where she wasn’t wanted. Although perhaps he had cause to think that. She hadn’t exactly taken the hint when he’d tried to shut her out when they were teens.

“What makes you think I’m going to insinuate myself into your life?” she added.

“You’re a helper, Katie, and I don’t want help. I want to find out what I’m capable of alone.”

“Well, we now know your capabilities in the wrecked four-wheeler department.” Katie instantly held up her hand. “Low blow. Sorry. But what makes you think I’m going to pay any attention to you at all?”

Okay. So, she’d rescued a few orphan calves. Some abandoned puppies. A few kittens. Big deal. She propped a hand on her hip. “And that’s your big fear? That I’m going to try to rescue you?” She lifted her eyebrows in a speaking expression. “Like I did today?”

Katie let out a frustrated huff of breath. “Fine. We’ll make a no-rescue pact. I won’t rescue you, again, and you won’t rescue me.” She lifted her chin. “Not that I would need rescued.”

He cocked an eyebrow and the color rose in her cheeks as she got his point. “I can now change a tire by myself, and if I get stranded after midnight, I have a cell phone.” And a lot more street smarts than she’d had back in the day.

“How about instead of a pact, you treat me like Ed Cordell? An employee of the ranch.”

Ed, the former ranch manager, had kept to himself, did his job and did it well. He’d been all business, and Katie had never been able to warm up to the man. But he’d kept the ranch running smoothly, she’d give him that.

“If you’re asking me to treat you like Ed, you’re serious about this leave-you-alone thing.”

“It’s not personal, Katie,” he repeated. “It’s what I need right now.”

Katie lifted her chin. “If you need to be left alone, I’ll respect your wishes. Believe it or not, I no longer need to tag along where I’m not wanted. I’ve changed over the past decade.”

She frowned at the unexpected remark, but before she could come up with a comeback or a question, Brady held out a hand. Katie stared at it for a second, feeling as if she was teetering on the brink of something dangerous, which was crazy because how dangerous could it be shaking hands with a guy who didn’t want her—or anyone for that matter—around? She resolutely put her hand in his, her nerves jumping as his warm, work-roughened palm made contact with hers and his fingers closed.

Katie nodded briskly before pulling her fingers free. “Deal.” She felt as if she’d just gotten a slow-motion electrical shock. That was the only way she could describe the tingle that gripped her body when they made contact, ultimately making her stomach tumble.

The vestiges of a crush from the distant past. That was all it was.

She reached for her door handle, her heart beating harder than before, and still feeling the warmth of his fingers on hers. She pushed her hands into her back pockets and met Brady’s gaze. “This is where we go our separate ways, living our parallel lives on the Callahan Ranch?”

He gave his head a slow shake, those mossy green eyes full of an emotion she couldn’t quite read as he said, “I doubt we’ll be able to do that, but when we do meet—”

THE GIVE AWAY!  If you’d like to win a copy of A Ranch Between Them, all you have to do is to tell me in the comments if you had a mad crush in high school.  🙂

The winner will be announced on Thursday afternoon, so stay tuned!

The wait is finally over!

More Than Words Can Say is now available!

I’m so excited to share Zach and Abigail’s story with you. Dozens of readers wrote to tell me that they fell in love with Zacharias Hamilton in his big brother role in More Than Meets the Eye. I have to admit that I did, too. Finding the perfect heroine for him, was a challenge, but Abigail’s feisty independence, her big heart, and her dedication to family became a recipe for love that Zach couldn’t ignore. Oh, and she can bake like a dream. The old adage about the way to a man’s heart being through his stomach didn’t become a classic for nothing. Wink, wink.

I thought I’d introduce you to Abigail with a fun little excerpt.

Her cheeks were growing pink. Probably because he was just standing there staring at her like an idiot instead of saying something.

Tightening his grip on the square, he cleared his throat. “What kind of proposition?”

She thrust a set of papers at him, the sheets crinkling as the corners bent against his chest. “A business proposition. A rather . . . um . . . unconventional one, but one I believe will prove beneficial to both of us if you’ll look past the first hurdle.”

He reached for the papers. “That hurdle being?”

She straightened her posture, which was an impressive trick of engineering since she was already standing as stiff as the board he’d been working on moments ago. Then she met his gaze and something grabbed at his gut. “Marriage,” she said. “To me.”

A cough exploded in his throat. He ducked his chin and turned aside, the choking sensation worsening to the point that he had to brace his arms against the workbench as he struggled to control the spasms. He’d always wondered how his brother Seth felt when an asthma attack hit. Now he knew.

“It might appear to be a beggar’s bargain on the surface,” she said from behind him, “but I promise there are benefits.”

His throat constricted further. Not even a cough could escape now.

“To start with, you can have all the sticky buns you like free of charge. For life.”

Breakfast. She was talking about breakfast.

Finally, a bit of air seeped into his lungs, allowing him to wrestle his unruly thoughts into submission as he turned to face Miss Kemp. He leaned back against the workbench, not yet trusting his knees to hold him upright on their own, and forced himself to meet his tormentor’s gaze.

He thrust the crumpled papers back at her. “I ain’t lookin’ for a wife.”

She made no move to collect the unwanted documents. “There’s a law,” she blurted. “A ridiculously archaic city ordinance that precludes women from owning businesses in Honey Grove. After my father died, the city council gave me three months to grieve, then approached me with an ultimatum. If I don’t sell the business, I can either partner with a male financial backer by the end of the month or have the marshal close the bakery doors for me. Permanently.”

Zach frowned. That seemed a bit extreme, but he didn’t doubt her word. Plenty of men believed that women belonged in the home and nowhere else. And he wouldn’t put it past them to enforce their will on her by dusting off some outdated legislation.

“That’s unfortunate, but I still don’t see what this has to do with me.”

Dimples appeared for the first time that afternoon as her lips curved in a triumphant grin. “You, my dear sir, are option number three.”

Grab your copy of Zach and Abigail’s story today!

By the way, today is my 27th wedding anniversary. Still living the happily ever after and loving it!

Hmm . . . maybe I should whip up some baked goodies for my heroic hubby. Does refrigerated cinnamon roll dough count?