Please join us in welcoming Hebby Roman as our guest author today! Welcome, Hebby! It’s great to have you join us!

Zach is the eleventh book in the Bachelors & Babies series. As with three of my other sweet western historical romances, I chose to set this book at a Texas fort, Fort McKavett.

I’ve been researching Texas forts for over two years, and I’m amazed by how many different kinds of forts there have been in Texas. In the early days, regions of Texas were claimed by both France and Spain. Each of them built forts to protect their claims. The Alamo is an example of a Spanish presidio, built to bring Christianity to the natives.

Along with the Spanish presidios and the log forts of the French in East Texas, there were many families who moved to the wild lands of Texas and built their own personal forts. The John Parker family established Parker’s Fort in 1833 on the banks of the Navasota River. This fort was the site of a well-known Comanche Indian raid in May 1836, where the Comanche captured 12-year old Cynthia Ann Parker. She was the mother of the last great Comanche chief, Quanah Parker.

The famous Texas Rangers built base camps to use for their raids on hostile natives and various outlaw bands. Before Texas became a part of the United States, it was an independent nation, known as the Republic of Texas, and the Republic built forts as well. Most of the Texas Republic forts were “rough” affairs of mud brick and timber. Prior to the Civil War, the United States built two lines of forts to protect settlers from hostile natives. Some of these forts were taken over by Confederate soldiers during the Civil War, others were decommissioned and abandoned, a few were used as outposts for state militia or even as stagecoach stops. Many of these forts were taken back by the U.S. cavalry and protected the Texas frontier for years.

Fort McKavett, where my book Zach is set, was one of those frontier forts that changed hands during the Civil War and was reclaimed as part of the U.S fort system. Originally, it was known as the Camp on the San Saba River, and it was established in March, 1852 to protect settlers from Comanche and Kiowa raids in Menard County, Texas. Later that year, in October, the fort was renamed Fort McKavett, in honor of Captain Henry McKavett, who had served meritoriously in the Mexican-American War.

With the outbreak of the American Civil War, the post was occupied by members of McCulloch’s Company E, 1st Texas Mounted Rifles, and the camp served as a prisoner-of-war camp for Union soldiers who had survived the Battle of Adams Hill, which took place north of San Antonio, Texas.

The fort was reactivated by the United States Army in April, 1868, as part of “the redeployment of a frontier military force,” by Brevet Lieutenant Colonel Eugene Beaumont’s 4th Cavalry Company.

From 1868 to 1883, Fort McKavett served as a major supply depot providing food and provisions for most of the Texas military campaigns, along with scientific and mapping explorations for other forts in West Texas. The spring of 1869 brought dramatic historic developments to the post with the arrival of the 41st Infantry, and its commanding officer, Colonel Ranald Mackenzie. The 41st was one of the army’s six regiments, and Mackenzie would become one of the foremost Native American fighters of the post-Civil War army.

Nestled in the picturesque Hill Country of Texas, Fort McKavett was characterized by General 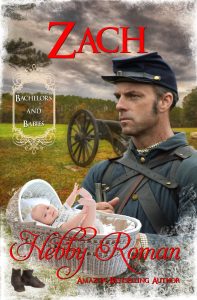 William T. Sherman as “the prettiest post in Texas” on his inspection tour of Texas forts in 1871.

My giveaway includes a $10 Amazon gift card, along with a digital copy of my boxed set, “A West Texas Frontier Trilogy.” “Zach,” which is set in Fort McKavett, as discussed above is the fourth book of my Texas fort series and it is currently in pre-orders. When it is released on April 1st, I will also send the winner a digital copy of “Zach.” One lucky winner will receive all three prizes! All you have to do to enter the drawing, is to comment on this blog and P&P will randomly select a winner.

Please,  leave a comment so we can chat and good luck!

Hebby Roman is a New York traditionally published, small-press published, and Indie published #1 Amazon best-selling author of both historical and contemporary romances. Her WEST TEXAS CHRISTMAS TRILOGY is an Amazon Bestselling and Award-Winning series. SUMMER DREAMS, was #1 in Amazon fiction and romance. Her medieval historical romance, THE PRINCESS AND THE TEMPLAR, was selected for the Amazon Encore program and was #1 in medieval fiction. She won a national Harlequin contest. Her book, BORDER HEAT, was a Los Angeles Times Book Festival selection. She has been a RONE Finalist three times and in three different categories.