This is a holy season and a time for sweet treats and books so sweet and warm they make you sigh.
All the better if the books hold within them the true meaning of Christmas.
To celebrate Christmas two things
A sweet treat:
Connealy Crunch
Seriously if you haven’t got the recipe and/or have never made this (Heaven knows I’ve posted it before)
You will be back here in Petticoats & Pistols thanking me!
It is just so delicious.

And a Sweet Book
I am giving away a signed copy of my Christmas Novella collection called:
Three Christmas Novellas
Those three books are all previously released, but two have never been in print before, just ebooks.
The middle book, The Sweetest Gift, is a fictionalized story about my grandparents marriage of convenience. I’ve changed times and dates and locations, for example my grandpa was a farmer in eastern Nebraska, in this book he’s a cowboy in western Nebraska. But the fundamentals, the train ride, the widower, the deathbed promise my grandpa made to married his dying wife’s college friend, the piano…though it wasn’t gained in quite so dramatic a way as in the book, my grandparents old country farmhouse had a grand piano in it, so big, in this room that was so small you couldn’t walk around the piano. I never knew how it got in there and I imagined they built the room around it, left a wall open to get it in, then boarded up the wall.
My mom (the fourth child born to this marriage) didn’t know when they’d gotten the piano, how they’d gotten it in that room or how long they’d had it. And you’d think she’d know that. And when my grandma died that piano vanished. (this part of the story isn’t in the book)
Now I’m sure someone just took it and either has it or sold it but it’s not known to me or my mom where it went.
I always thought of that piano as a bit magical. It appeared in that little country farmhouse and when my grandma died it disappeared.
Anyway, that’s book two in:
Three Christmas Novellas

Longhorn Christmas, The Sweetest Gift and The Christmas Candle 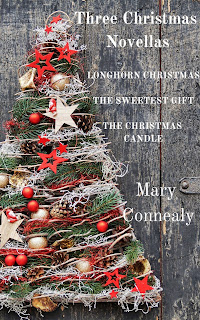 Netty Lewis, a lonely young widow is saved from a raging mama longhorn by a passing cowboy who’s been wandering since the end of the Civil War.
She needs help surviving her rugged life and caring for Jeremiah, her young son. And that means rounding up a nice-sized herd of wild-as-wolves longhorns.
Netty and Roy, along with Jeremiah begin a journey toward Christmas, family, home and love.
And a herd of longhorns are making the way hard.

She longs for music. He needs a valuable horse to improve his herd.
When Christmas comes the gift they truly give is the gift of love. A sweet re-telling of The Gift of the Magi–with a happy ending

A lonely widower with a pair of out-of-control sons he never got to know while their mother was alive.
A woman with a love of nature and beauty and scent…and the little boys seem determined to destroy her way of life.
A feisty Ozark mountain granny who doesn’t put up with much nonsense.
The gift of a candle for Christmas and a Christ child who is a perfect match for this scent of heaven.

I’m giving away a signed copy of Three Christmas Novellas–leave a comment to get your name in the drawing.

And the recipe is for everyone!!!
And just up, I have a new Garrison’s Law out! 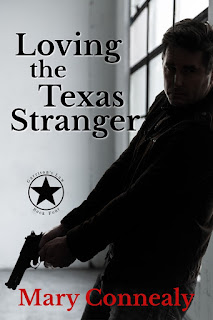 An assassin takes a shot and hits two people with one bullet.
Natalie Brewster, a deep undercover agent for a group that doesn’t officially exist, saw the gunman aiming. He definitely waited, lined up the shot, and tried to kill both of them. Nat and Case Garrison hit the ground bleeding. They both come up shooting and kill the assassin—but that just makes him mad.
Now Case and Nat, who have never before met, have to figure out what they have in common to make them prey for a killer.
And they have to do it while running for their lives because, despite the two of them being highly skilled at keeping a low profile, the killer keeps finding them. They are running at break-neck speed, hiding with all the skill of long-time undercover agents, and falling in love with a passion that might be part of what brought a killer down on them.