The Yuma Territorial Prison in Arizona accepted its first inmate in 1876.

For the next 33 years 3,069 prisoners, including 29 women, served sentences there for crimes ranging from murder to polygamy. The prison was under continuous construction with labor provided by the prisoners.

The Yuma Territorial Prison figured in Three-Ten to Yuma, a 1953 Western short story written by Elmore Leonard and two film adaptations: the 1957 original 3:10 to Yuma starring Glenn Ford and Van Heflin,  and the recent remake with the same title starring Russell Crowe and Christian Bale.  Yuma was also in the 1969 film The Wild Bunch: “You’ve got thirty days to get Pike, or thirty days back to Yuma.”

In the 1961 western, The Comancheros, starring John Wayne, Yuma is also referenced. Yuma prison is 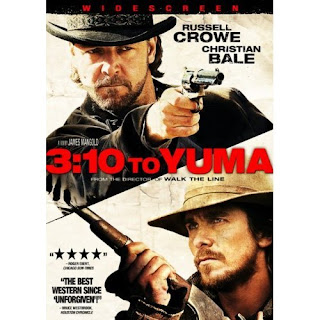 referenced frequently in western radio and television shows such as Gunsmoke and Bonanza, where ex-cons were frequently described as having done time.

A line I’ve heard before is something along the lines of, “If we get caught, we’ll burn in Yuma.”

As if that is a bad, bad thing. Right?

Well, you know, despite an infamous reputation, written evidence indicates

that the prison was humanely administered, and was a model institution for its time. The only punishments were the dark cells for inmates who broke prison regulations, and the ball and chain for those who tried to escape. During their free time, prisoners hand-crafted many items. Those items were sold at public bazaars held at the prison on Sundays after church services. Prisoners also had regular medical attention, and access to a good hospital.

A majority served only portions of their sentences due to the ease with which paroles and pardons were obtained. One hundred eleven persons died while serving their sentences, most from tuberculosis, which was common throughout the territory. No executions took place at the prison because capital punishment was

administered by the county government.

Schooling was available for convicts, and many learned to read and write in prison. The prison housed one of the first “public” libraries in the territory, and the fee charged to visitors for a tour of the institution was used to purchase books. One of the early electrical generating plants in the West furnished power for lights and ran a ventilation system in the cellblock.

Let’s not kid ourselves that this was a garden spot, though. It was hot, dry and above all else, remote. Yuma was (and still is) one of the hottest and driest places on earth. It was 170 miles of nothing to San Diego and 220 miles to Tucson in another direction, and that made Yuma one of most isolated places in Arizona-which made escape almost impossible, because it was too far to walk to find water or steal a horse. Of the many prisoners who attempted escape, only two got away

from within the prison confines.  Eight where killed, shot, while trying to get away. That makes your chances four times higher to die escaping than to make it. Enough to make a person just stay put.

And that was Yuma’s true power. There was no escape. And that’s why it was feared and talked about with dread. Well that and maybe the 110 degree heat. Yikes.

The Territorial Prison was also known as “Hell Hole” and “Devil’s Island”. All over the country the prisoners were send to Yuma and placed in the cells 10 x 10 foot rooms where the temperature was often over 110ºF in the summer and were the prisoners was chained to the stone floors and walls in the dark cells.

After a fire and years of neglect, everything is gone except the cells, main gate and guard tower, who provide today a glimpse of how was the life in the prison for a century ago. Across the prison is old prison cemetery, where the prisoners who died at Yuma were buried.

There are tales of ghosts in Yuma.

Particularly about the “dark cell”, the place of punishment for prisoners unable to follow the rules.

A ranger at the prison site, talks about an incident when she sensed a presence in the cell that frightened her. She also told him of a photo that she had in her files that was taken of a female tourist in the 1930’s. While the woman in the photo does not appear out of the ordinary, there is a clear image of a ghostly man behind her and just inside the opening of a cell. This cell, which has since been walled up, was where insane prisoners were housed before being moved to other facilities.

A writer from the magazine Arizona Highways came to write a story about the prison. The writer asked to spend two days and nights in the “dark cell”, chained by the foot and with nothing but bread and water to eat and drink. The staff provided her with these things and then placed a heavy blanket over the cell door to keep out all of the sunlight, just as it would have been when the prison was in operation. Within hours, the writer called for help, claiming that “someone” else was in the cell with her.

I suppose I’ll continue to do my research on prisons on the internet, rather than request to be locked up in a cell so I know what that feels like…..yikes!!!

And what about the women in Yuma? I found a couple of books dedicated to them. One has a list of several names, very interesting.

Prison officials left the first woman prisoner, Manuela Fimbres, to roam among the male guards and prisoners; consequently, she gave birth to two children. Later, she was enclosed in a wire cage which no one was allowed to come near. Though conditions for the women at the prison gradually improved, things were still rough. Men continued to have access to the women’s quarters, and the cramped quarters and unsanitary conditions led to sickness and disease.

Pearl Hart robbed a stagecoach. Alfrida Mercer was sent to prison for adultery. Bertha Trimble was convicted of rape. Three girls under 18 were sent there. You can read details here. It’s interesting.
Do, you want to talk about prison conditions then and now? Or maybe, have you ever seen a ghost?