When I was a little girl, we got only

one television channel. Fortunately, it was the channel with Roy Rogers, The Lone Ranger and Sky King. As a kid, I ranked these shows in the same order I just listed them. Roy was, without a doubt, the king of my Saturday television lineup. The Lone Ranger second, and Sky King third. The reason? Why Sky didn’t ride a horse. He flew an airplane. His niece, Penny, rode a horse, however 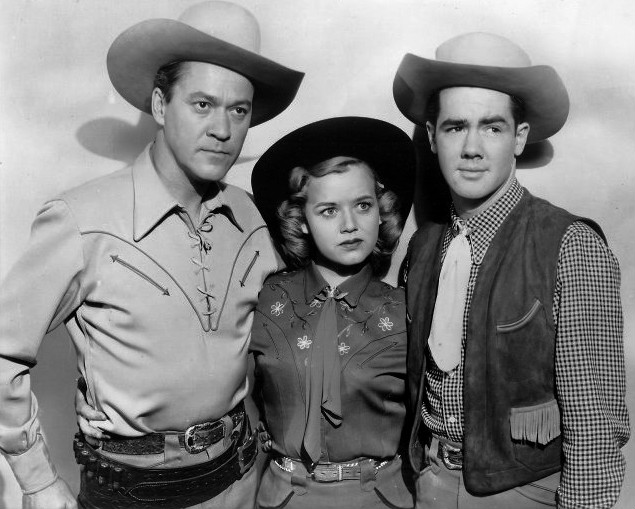 , so that made the show worthy of my attention.

Looking back, however, I think Sky had the most interesting premise–to someone who hasn’t put on her cowgirl shirt in preparation for a Saturday spent with her heroes. The show may have been based on Jack Cones, The Flying Constable of Twenty Nine Palms, California, although that has not been verified.  The hero of the show, was Schuyler “Sky” King, a former military pilot. He lived on the Flying Crown Ranch in Arizona with his niece, Penny,  played by Gloria Winters, and nephew, Clipper, played by Ron Hagerthy. Like many ranchers l

iving in remote areas, he had a small Cessna airplane, Songbird, but in addition to checking the herds, the condition of the range, and traveling to town for supplies, Sky also used his plan to capture criminals and spies, solve crimes and  find people who lost their way in the desert. He had help in the form of the local sheriff, Mitch, played by Ewing Mitchell.

During the half hour show, people would get themselves into trouble, and with the help of the Songbird, Sky wo

uld rescue them. I particularly remember Penny getting into a boatload of trouble. She was forever getting captured, and that kept me on the edge of my seat, wondering how Sky was going to get her out of this mess.

The radio show ran from 1946 to 1954 and the television version, starring Grant Kirby as Sky, started in 1951. For a time the radio and television versions ran simultaneously. The television version lasted until 1962. According to Wikipedia, “the plot lines were often simplistic, but Grant was able to bring a casual, natural treatment of technical details, leading to a level of believability not found in other TV series involving aviation or life in the American West. Likewise, villains and other characters were usually depicted as intelligent and believable, rather than as two-dimensional. The writing was generally above the standard for contemporary half-hour programs, although sometimes critics suggested that the acting was not.”

Hmm–I remember the acting as being superlative. And if Sky had ridden a horse as often as he flew the plane, Sky King might have bumped The Lone Ranger out of second place in my personal favorites standings. Interestingly, the show was popular in the aviation community, even though it was written for kids, and several astronauts noted it as a show that influenced them as they grew up.

If you remember Sky King, or want to know more, there is an official Sky King website you might want to check out, and all the episodes are also available on DVD. There is also a Sky King Fan Club page.

Quick question–do you remember Sky King? If not, did you have a favorite TV cowboy? Or pilot?

16 thoughts on “Out of the Blue of the Western Sky Comes…Sky King!”