Long before I wrote my first Harlequin Presents, my true love was the cowboy hero and this love was inspired and nurtured by wonderful books written by one of my all-time favorite authors, Anne McAllister.  I loved her main characters, the plot lines, the descriptions—everything!  Anne made it so easy to fall in love with the cowboy alpha hero and all my early cowboys were inspired to a large extent by Anne’s cowboy romances.

I thought it would be fun to interview Anne McAllister on the P&P blog today so please join me in giving her a big welcome! 🙂

Best-selling author Anne McAllister has written nearly 70 romance novels — long and short, contemporary, time travel, and single title. She has won two RITA awards from the Romance Writers of America and has had nine other books which were RITA finalists. Anne grew up on the beaches of southern California, and spent summers in Montana and on her grandparents’ small ranch in Colorado. They were formative experiences — not only in providing her settings, but in giving her heroes. She finds herself attracted to lean, dark, honorable men – often lone wolf types – who always get the job done, whatever it might be. Anne and her husband, The Prof, spend the school year in the Midwest now, but are looking forward to more time in Montana when he retires. But wherever they are, Anne will always be writing. There are too many ideas not to!

Jane: You have made a career writing alphas…which came first, your cowboys for Silhouette Desire or your tycoons for Harlequin Presents?

Anne: Neither! My first dozen or so heroes were an archaeologist, an actor, a book illustrator who moonlighted as a beach lifeguard, a baseball player, a Major League umpire, a wildlife biologist/ photographer, a rock star turned grad student, a bartender, an architect, a jungle guide, and a journalist.

I probably write more “lone wolf” heroes than alphas. But what the cowboys, the tycoons (there were probably only two!) and all the rest of my motley crew of heroes have in common is they are strong, capable men who know what they want and how to get it done. My earlier heroes just had a greater variety of venues in which to do it.

But all of them are, in a word, competent. I love competence. I think competence is sexy. And when a competent guy falls for the heroine, I can pretty well be assured that he’s going to figure out how to get her, which makes my job easier.

And, of course it doesn’t hurt if he looks like the guy on the cover of Cowboys Don’t Cry!

Jane: I have been a long time fan of your writing, Anne, but it was your cowboys that swept me away and made me want to write a great cowboy hero. What draws you to the cowboy hero? Why do you like to write his story?

Anne: Well, he’s competent (see above)! You can count on him to get the job done no matter what it is or what the cost. There is a saying among cowboys: “He’s a good man to ride the river with.” That applies to every cowboy I’ve ever written about. They aren’t necessarily easy to deal with. They can be hard-headed, single-minded and they don’t suffer fools gladly. But when the chips are down — when you need them — they’re there.

Also, my own experience when I was young was that cowboys were pretty much uniformly kind to kids and animals, and they were respectful of women. As a kid, I responded to that. As an adult — and a writer — I still do.

I also like that they are live-and-let-live men. The west is a great place for second chances, for starting over, making new beginnings. My cowboys — and most people — haven’t always got things right the first time around, so I like that they have lived to fight another day, that there is room for hope.

Power is often a word that comes with the alpha hero. It is not a word that springs to the lips when you talk about cowboys. They are not powerful in the traditional sense of the word. And that appeals to me, too, because “power” always seems to evoke its opposite: powerlessness. And that’s not a dynamic that interests me. It’s not a relationship the interests me. On the contrary, I want to explore and to celebrate relationships where both people bring different strengths together, where they complement each other, fulfill each other, and bring out the best in each other. I can do that with a cowboy hero.

Wealth is not a word commonly associated with cowboys, either. I understand the ‘alpha fantasy’ that comes with the billionaire hero. It’s another way of saying he’s successful, that he can get the job done. It’s another version of competence. But wealth per se does not equate with success in the cowboy world. Of course money is nice, but beyond the basics, it’s not what you need in the West to succeed. It is, if anything, a false god. I’m writing about it now in the book I’m working on. It tempted my hero’s father and ultimately destroyed their family. It isn’t always a good thing. So I do not need, as one of my editors once said, “cowboys who own multi-national corporations on the side.” It’s the other measures of the man that interest me.

The women who survive and thrive in a cowboy’s world bring their own competence. By virtue of coping in a demanding and often harsh environment, they bring an equality to their relationship with a cowboy hero. Cowboy heroes simply demand strong independent women. Because I like working with strong characters, I like writing their stories.

Jane: You write the rugged West so well. Are you from a small Western town?

Anne: I grew up in southern California — land of sun, sand, surfers and beach volleyball players (even wrote a hero who was one)! But my roots are in the West — in Montana and Iowa on my mother’s side and in Oklahoma and Texas on my dad’s, so I think perhaps it’s bred in the bone.

We did spend some summers with family on my grandparents’ small ranch in southwestern Colorado when I was growing up. I loved every minute of it. My adult life has been spent primarily in Iowa where those same values are rock solid. Now we are in Montana (there’s a circular migration pattern in my family apparently) where I’m happy to see my grandkids’ parents instilling in them the same independent, hard-working, yet compassionate values that seem to go with the territory.

Jane: Do you have a favorite type of heroine you like to write? 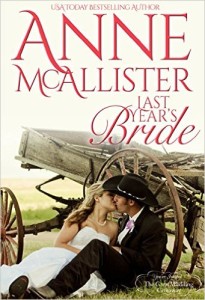 Anne: I like strong, independent-minded heroines who can — and have — relied on themselves. One of my favorites was actually not a heroine at all (in a book at least), but the hero’s grandmother in Last Year’s Bride. Em McCullough had raised her kids and three of her grandkids, and had taken in a cousin’s boy for part of his teenage years. She had been in charge of the Marietta Christmas program for 50 years. She had everyone’s back. She was a fixture. And her grandkids would have said they knew exactly who she was. But there was more to Em than she’d ever really bandied about. And it’s that little bit inside her that her grandkids discovered toward the end of the book that opened their eyes — and made them look at her in a new light, and themselves as well.

I love Em. She’s in my upcoming book, McCullough’s Pride. She had a part in Rachael John’s Marietta rodeo book and is about to show up in one of Deb Salonen’s Marietta books as well. Em gets around! She embodies all the stuff I like to write about most in my heroines — their strength, their compassion, their connection to the community, and the little bits of themselves that they don’t always share, but which give them surprising depth and make them who they are.

Thank you, Anne for your time!  Readers, I hope you’ll try Anne’s books if you aren’t already a fan of hers and to add to the fun, I’m giving away a fun Jane Porter & Anne McAllister giveaway just for you!  For a chance to win, leave a comment for Anne!

Jane Porter, the NYT and USA Today bestselling author of 50 romances and fiction novels, holds an MA in Writing from the University of San Francisco and has been a finalist for the prestigious RITA award in the US five times, with her novella, Take Me, Cowboy, winning the Novella Category July 2014. In 2008 Jane's wildly popular novel, Flirting with Forty, was made into a Lifetime movie starring Heather Locklear, and just recently Jane has had two more stories optioned for cable movies. For more info, visit www.janeporter.com.
← Previous Post
Next Post →