weren’t supposed to prospect for precious metals in the 1800s. They were considered too delicate to travel across wilderness and deserts, collecting ore samples and chasing veins while carrying everything they needed to survive in a backpack. Ferminia Sarras did it anyway.

There’s no clear record as to why Ferminia, who was born in Nicaragua in 1840, came to the United States with her three young daughters in 1876. One theory is that she came 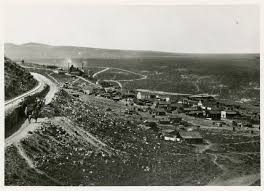 to join up with her husband in the Nevada mining camps. She placed two of her daughters in a Virginia City orphanage, quite possibly for their safety, before embarking on her journey to the camps with her oldest daughter, who married a miner a few years later.

After the Comstock Lode petered out, Nevada went into a depression, however the discovery of gold in the central part of the state revitalized the mining economy and Ferminia’s copper claims increased in value. Her first sale came in 1901, with several more to follow, and eventually she made a fortune on her copper claims, thus earning the name the Copper Queen. She kept the gold coins from the sales in her chicken coop, which she considered safer than a bank.

Ferminia married at least five times to men younger than herself. One husband died in a gunfight protecting her claims and according to a newspaper account, all of her husbands died violent deaths. Historians theorize that she may have married younger men to help protect her claims, however one of the last men she was involved with robbed her and used the money to flee to South America.

Ferminia died in 1915. The town of Mina, Nevada, which currently boasts a population of 155,  was named in her honor.

For further information on Ferminia Sarras and other women who dared to prospect in the American West, check out A Mine of Her Own by Sally Zanjani. Much of the information I have on Ferminia came from that resource.