While seeking an interesting topic for schooldays and teachers, I googled movies about teachers. I found a lot of them I liked, but one in particular resonates with me because the story is profound and amazing and true.

The Miracle Worker is based on Helen Keller’s autobiography, The Story of My Life (1903).  American playwright William Gibson wrote a play for a 1957 Playhouse 90 broadcast.  The original Broadway production opened at the Playhouse Theater in October 1959 and won the 1960 Tony Award for Best Play. Anne Bancroft who won the 1960 Tony Award for Best Actress in a Play for her role as Annie Sullivan and Patty Duke as Helen Keller recreated their stage roles in the movie.

I never see either of them without remembering their performances in this movie. Recently I watched the Hallmark movie, Homecoming, with the still-beautiful Anne Bancroft. Okay, I confess, Mrs. Robinson flitted before my eyes for a second there, too.

Television remakes were done in 1979 and 2000. many of you might remember the Melissa Gilbert version, where Melissa plays Helen and patty Duke plays Anne Sullivan.

At the age of nineteen months Helen Keller lost her sight and hearing during an illness, historically surmised to be  scarlet fever or meningitis. Pampered and spoiled by her parents from then on, Helen got her way by hitting, kicking, and throwing tantrums. Giving their daughter one last chance before she is institutionalized, her parents send for a teacher from the Perkins School for the Blind. Annie Sullivan was once blind herself, but after nine operations on her eyes gained sight. Against all odds, Annie determined to break through Helen’s world of darkness and silence. 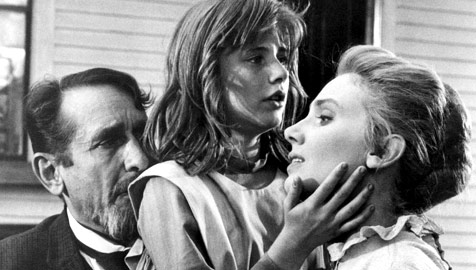 One of the most moving scenes is when Helen finally understands the connection between the finger spellings and the objects they represent. Teacher and student show Helen’s parents what she has learned. There is much excitement and hugging, after which Helen pokes Annie, asking for her name. Annie spells t-e-a-c-h-e-r.

Helen pats the pocket on her mother’s dress, asking for the keys she put there. Helen takes the keys and offers them to Annie, a sign that Helen is finally willing to welcome Annie as her teacher. We are moved by the overwhelming emotions of each person. Helen who has lived in a frustratingly dark  and silent world, unable to communicate has just found a way to connect with the world. Annie has finally given Helen the keys to rich and fulfilling life. And while Helen’s mother is grateful to Annie and joyous for Helen, she must feel like the outside now.

In the final scene, just before bedtime, Helen comes into Annie’s room and kisses her cheek. They rock together for a while, as Annie spells out i-l-o-v-e-h-e-l-e-n. This is a teacher who will forever be remembered for her persistence and tough love. It blesses me to know teachers like Annie are still helping special needs children. It takes a special gift and a willing heart to commit to children in similar circumstances.

If you haven’t seen The Miracle Worker for a while, give it a watch. If you’ve never seen it, treat yourself.

Land of Dreams for Kindle: http://tinyurl.com/awe75qd
Colorado Courtship (Winter of Dreams) Anthology LIH 1/13
Visit me on the web: http://www.cherylstjohn.net/
From the Heart: http://cherylstjohn.blogspot.com/
← Previous Post
Next Post →