How much do I love SuperChannel?

A friend mentioned that I would probably like a new series called Hell On Wheels. I checked it out (On Demand) and the husband and I watched the first episode and LOVED it.

It all starts with a Union Soldier in a confessional, seeking absolution for things he did during the war. In particular, what happened to a woman. When the confessional is over, both man and priest emerge, but it’s not a priest at all. It’s Cullen Bohannon – the woman’s husband. And he’s out to get every man that brutalized and then murdered his wife.

It takes a cold dude to kill a man in a church and then walk out with his greatcoat flapping. 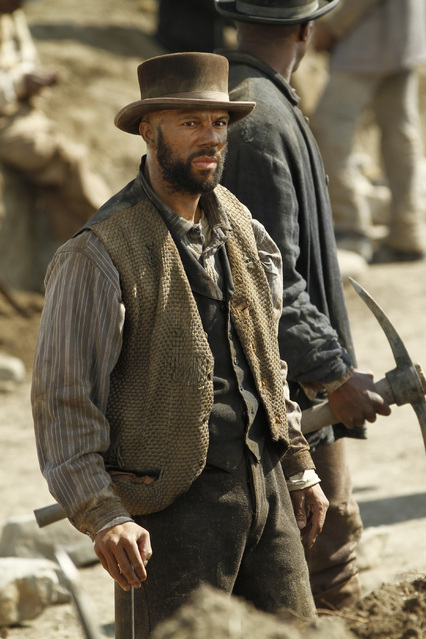 His search takes him to Hell on Wheels – the travelling camp of the men building the Union Pacific railroad. As you can imagine, it’s rough. A good portion of the workforce is freed slaves, and as we all know the term free was a formality more than anything else. He’s hired as a supervisor to the crews, and strikes up an unlikely friendship with Elam Ferguson (played by Common).

The whole thing is ruled by Thomas Durant, who’s a bit greasy and not above manipulating senators and stocks to see that the railroad gets built. Durant’s chief surveyor, Bell, is killed in an Indian attack but his wife, Lily, survives – and it’s Bohannon who brings her back to camp. And all the while Bohannon is trying to find the last of the men responsible for the death of his wife.

It’s a great story, a fantastic setting, wonderful, complex characters (The Swede as Durant’s “muscle” is deliciously creepy). Of course the cast isn’t hard to look at either. My husband is rather partial to Lily Bell.  I, of course, adore Bohannon (played by Anson Mount). In fact, there may be a reclusive rancher in a story soon that bears a striking resemblance.

And I’ll admit it – best of all was the night Bohannon and Elam had to fight each OTHER. I looked at my husband and said, “I hope they fight with their shirts off.” Yes, I’m just that shallow.

A bit of history, a bit of romance, a lot of action. Can anyone say “All aboard!”