A Gunfighter’s Rules to Live By

Okay, I admit it; where guns are concerned I’m a chicken. So when my son announced he signed me up for a shooting class I didn’t exactly jump with joy.  “Come on, Ma,” he beseeched when I balked.  “I told them you write westerns and they agreed to bring their Old West collection.”

The first challenge was finding the place.  It’s hidden somewhere in a canyon in the San Fernando Valley at the end of a very long dirt road.  Upon my arrival I was introduced to Bodie aka Willy Clark. Dressed in authentic cowboy gear he looked like a character right out of a Louis L’Amour book. He didn’t just know weapons he knew the west.  Bodie likes to put history in context.  “Hollywood did us no favor,” he explained. “While cowboys were shooting up Tombstone, Bell was talking on the telephone.”

Bodie and I discussed a tricky scene I’m working on and he gave me some terrific ideas.  The other workshop attendees—all men by the way—got in the act.  I wonder what they’d say if they knew they were helping plot a romance novel?

Bodie ran down the safety rules and taught us how to load a weapon with black gunpowder cartridges.  What you need to know about gunpowder is that is smells like sulphur and makes a lot of smoke.

Contrary to popular belief poor shooting was the norm in the Old West and it’s easy to see that gunpowder smoke was partly to blame. A gun battle between cowboys and Indians would have created quite a smokescreen.   Some lawmen fared no better in shooting skills than did your average cowpoke.   A self-generated reputation–the deadlier the better– saved many a lawman from dying in the street.  No one was better at exaggerating than Bill Hickok, who described an ambush of three farmers as a shoot-out with nine desperados.

Few gunslingers carried a notched weapon, probably because they didn’t want to embarrass themselves.  Of course, this didn’t keep Bat Masterson from running a successful business selling “genuine” notched guns during his retirement.

The Real Gun that Won the West

Hint, hint, it was not the Peacemaker. Cody insists it was the 12-gauge double-barrel shotgun (also called a scattergun).  The double barrel means it has two triggers. The shotgun was the most prevalent weapon in the U.S. and every rancher, farmer, wagon train emigrant and cavalryman had one. The shotgun was easy to use and the perfect weapon for everything from shooting game to fighting off Indians.

The scattering effect of buckshot had its good and bad side.  Buckshot spreads eight inches for every twenty-five feet.  In layman’s terms that means that unless you are close to your target you’ll probably miss.  But it was precisely this spreading effect that made it the weapon of choice for lawmen wishing to control unruly crowds.

The first time I pulled a shotgun trigger I near fell over backward.  That kick would make any mule proud. The hands you see behind me belong to my son, ready to catch me on my second round. I learned the hard way to hold the butt against my shoulder—hard!

After “mastering” the shotgun I moved on to the Colt Peacemaker.  The Colt was popular with lawmen and outlaws alike. Loading a Colt was more involved than loading a shotgun. To keep a round from discharging a loaded chamber by accident you load only “five beans in the wheel”  by loading one, missing one and loading the rest. If you’re heading for a gunfight be sure to load all six beans.  If by chance you’re chased by outlaws while on your horse, hold your gun and reins in your left hand and load with your right.

The thing you need to know about the peacemaker is that the barrel tends to move upward after you fire.  That’s why Bat Masterson said to aim for the belt buckle and hit ’em in the chest.  Bat was credited with shooting thirty-one men though in reality he shot only one.  This proves that shooting at belt buckles isn’t as easy as you might think.

I came away from my lesson without any notches on my belt, but taking a cue from my fisherman husband I can now talk about the target that got away.

How about you? Any notches on your belt?  The best story–true or false–wins a book!

A Vision of Lucy (A Rocky Creek Romance) 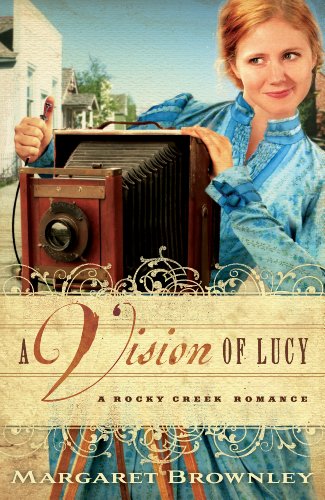