Love and Laughter in the Old West

One of my favorite research tools is old newspapers.  I used to make myself sick going through microfiche at the library, but thanks to the Internet many old newspapers are now available on line.

Reading some of these newspapers is like reading the National Enquirer.  During the 1800s there were no shortages of ghosts, UFOS, monsters and other strange phenomena.  Weird animals?  You name it.  Giant reptiles, huge birds and an eighteen horn cow made headlines.  It wasn’t just oversized animals that made news: One man supposedly outgrew his coffin.

Buzzing lights, airships, immense meteors and strange moving lights were witnessed by firemen, undertakers, miners and a twelve year old who “didn’t believe in ghosts, whose parents never scared him with spook stories, and who is one of the best behaved scholars in the fourth grade.”

Meteor sightings frightened residents and created “adject fear” in livestock. An air ship spotted over Dallas, Texas in 1896 was proclaimed by preachers to be the “Second coming of Christ.”

You’ve heard of Roswell and the alien that supposedly crashed there, but did you know that something similar happened in Aurora, TX in 1887?  According to “Hidden Headlines of Texas” compiled by Chad Lewis “something out of this world” crashed and demolished a windmill in Aurora.  “Mr. T.J. Weems, a U.S. Army Signal Service Officer and an authority on astronomy, gives his opinion that the pilot was a native of Mars.”

Ghosts were reported throughout the west, even by those proclaiming not to believe in them.  Houses, mines, theaters and even certain roads were haunted.  According to an article in a Tombstone Epitaph dated 1907, a Texas mining man purchased a haunted mine and soon realized his mistake when “spirits” chased away his workers.

Wild men ran rampant through the old west, though none of the real wild men reported in newspapers were quite as handsome as the “wild man” in my June release A Vision of Lucy (Yep, inspiration abounds in those old newspapers). Posses were formed to chase down scantily-clad wild men but apparently few were ever caught.

Blame it on the Republicans

One wild man in Galveston created “consternation” among its citizens by “lapping up milk like a dog” and “eating fried chicken raw.”   Not everyone was disturbed by his behavior.  The Galveston Daily News defended the wild man in an editorial: “Well, do not be heard on the poor, frenzied half-frenzied creature; he is probably some eminent Republican who ran away to keep from being nominated for the vice presidency.”

“Lunacy” and “sudden insanity” seemed to plague 19th century citizens.  Jokes, religious excitement, storms and disgrace were among the reasons given for a sudden crazed or deranged state.   One husband had his wife committed for reading a dime novel.

You’ve heard of postal workers running amok, right?  It turns out that telegraph operators sometimes went postal, too.  One such telegrapher in El Paso, Texas proclaimed he was God and threatened to “demolish” a co-worker.   Another crazed telegraph operator terrorized an entire county.  It’s not clear if he was ever captured.  Then there was the man who claimed to be hypnotized by telegram.

Things got so bad according to a preface in Wisconsin Death Trap by Michael Lesy that “Many historians have become convinced there was a major crisis in American life during the 1890s.”

Must be Those Electric Curlers

Some people blamed the bizarre behavior reported in newspaper in the latter half of the nineteenth century on the Industrial Revolution.  Electricity, telephone and automobile came right on the heels of the train and telegraph.  Not only did these inventions change the way people lived but how they thought.  Electricity was even blamed for “messing with women’s heads.”  Some were more than eager to blame Edison for the suffragette movement that swept the country.

It kind of makes you wonder what they’ll say about those of us who lived through the electronic revolution, doesn’t it?  Personally, I haven’t seen any Martians, but I swear I was once hypnotized by my iphone.

A Vision of Lucy (A Rocky Creek Romance) 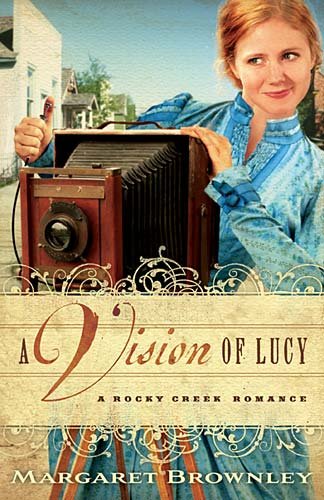