On a vast open plain a few miles south of Ponca City, Oklahoma, lies the burial ground of one of the greatest ranching empires of the West—the Miller brothers’ 101 Ranch.

None of the former 101 Ranch estate remains today. All of the buildings were destroyed and the land subdivided and sold after the Miller Brothers’ final bankruptcy. This photo shows the 101 Ranch as it existed with ranchhouse, corrals, and out-buildings.

Established in 1893 by Colonel George Washington Miller, a former Confederate soldier, and his wife Molly, the 101 became known as the “Largest Diversified Farm and Ranch in America.”  It was nicknamed the “White House.”

Not only was the 101 one of the largest working ranches west of the Mississippi, it was even more famous for its Wild West shows.  These displays of horsemanship, roping, and daring “rescues” transitioned from local shows to the national level in 1907 when the 101 Wild West Show performed at the Jamestown Exposition in Virginia.  In 1908, the tour circuit began in earnest. 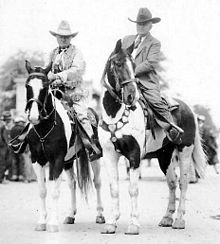 Pawnee Bill and Zack Miller on horseback in Oklahoma.

The Miller brothers, Joseph, George Jr., and Zack, had permitted some of their cowboys to perform at a local fair, and from this, their own Wild West show grew to become known worldwide.

It was essentially a Wild West show, complete with cattle, buffaloes, cowboys and Indians.  It included an all-around crowd pleaser—the attack on the stagecoach.  But it also contained elements of the circus with sideshows, and “freaks” such as the Bearded Lady.  In the heyday of its popularity, the Millers’ 101 Wild West Show netted them over one million dollars per year!

The Miller brothers were latecomers to the Wild West show circuit, causing them to suffer financially with the advent of movies.  Even so, their show became the largest in the nation by the 1920’s, requiring more than 100 train cars to travel from town to town.

By 1916, the two younger Miller brothers, George Jr. and Zack, gave up trying to work with their temperamental oldest brother, Joe.  It was during this time period that Joe hired an aging Buffalo Bill Cody to star in a WWI recruitment show:  The Pageant of Preparedness.  Cody quit the show due to illness, and died within a year.  Still, Joe tried to keep the show going, but was unsuccessful.  He offered it for sale to the American Circus Corporation in 1927.  They were uninterested, suffering from financial distress as well.  On October 21, 1927, a neighbor found Joe Miller dead in the ranch garage of carbon monoxide poisoning.  Several months later, his brother, George Jr., was killed in a car accident.  In 1932, Zack Miller was forced to file for bankruptcy.  The U.S. Government seized what remained of the show’s assets and bought 8,000 acres of the 101 Ranch.  Zack Miller died in 1952 of cancer.

Today, what remains of the once-glorious three-story stucco 101 Ranch headquarters is rubble.  Over ten years ago, efforts began to turn the site into a roadside park.

Bill Pickett, the inventor of bulldogging, or steer wrestling, is buried there.  On the same mound where Bill Pickett lies is a memorial to the Ponca chief, White Eagle, who led his people to a nearby reservation during the 1870’s from their holdings along the Nebraska-Dakota border.

The stone monument was built as an Indian trail marker where signals and messages could be left by different friendly tribes who passed by.  These tribes generally understood the signals, and could tell which way the other travelers were going.  Gradually, settlers took away the stones for building purposes.  Because Colonel George Miller and White Eagle were lifetime friends, and Joe Miller was adopted into the tribe, the renovation of the trail marker had significance to the 101 Ranch for many reasons.

The 101 Ranch was a bridge between these old, lost days of the early West, when Colonel George Miller started the venture as a settler after the States’ War, and the modern times of change.  The 101 Ranch was the headquarters for the show business contingent of cowboys and other western performers of the early 1900’s.  Will Rogers was a frequent visitor, as well as presidents and celebrities from around the world.  Some of the first western movies were filmed on the 101 Ranch.

Though there isn’t much left of the actual building, the 101 Ranch exceeded the expectations for a “cattle ranch.”  Indeed, it was a virtual palace on the Oklahoma plains; a place where dreams were lived.

In my historical western novel, Fire Eyes, Kaed Turner talks with his friend and mentor, Tom Sellers, about giving up law enforcement and settling down to ranching.  At first, Tom sees it as an unattainable dream; but as the conversation progresses, the possibilities look better.  Here’s what happens!

Tom smiled. “Glad you’ve got somebody good—deep down—like you are, Kaed. Ain’t too many men who’d take on another man’s child, love her like you do your Lexi.”

Kaed put his hand against the rough wood of the tree and straightened out his arm, stretching his muscles.

Tom drew deeply on his pipe, and Kaed waited. He’d known Tom so long that he recognized the older man was going to broach a subject with him that he normally would have avoided. Finally, Tom said, “I told Harv he needed to find someone. Settle down again. Grow corn and make babies. Think I might’ve offended him. But after seein’ him with little Lexi, it hit me that he seemed content. For the first time in a long while.”

It had struck Kaed, as well. Harv rarely smiled. But when he’d played with Lexi, it seemed that grin of his was permanently fixed on his face.

“Seems that way for you, too, boy.” Tom wouldn’t look at him. “Seems like you found what you’ve been looking for. Don’t let marshalin’ ruin it for you, Kaed. I’ve stayed with it too long. Me and Harv and Jack, we’ve been damn lucky to get this old without gettin’ killed either in the War, or doin’ this job.”

Tom nodded. “You made me realize somethin’, Marshal Turner, and now I don’t know whether to thank you or cuss you. When I saw the way that woman looked at you, the way that baby’s eyes lit up, it made me know I shoulda give this all up years ago and found myself somebody. Taken the advice I gave Harv. Planted my seed in the cornfield and in my woman’s belly, and maybe I’d’a been happier, too.”

“It’s not too late.” Kaed’s voice was low and rough. The doubt he’d had at starting his own family again was suddenly erased by the older man’s words. Nothing would bring his first family back. But he had a second chance now, and he was a helluva lot younger than Tom Sellers. He’d had it twice, and Tom had never had it at all. Never felt the love flow through a woman, through her touch, her look, and into his own body, completing him. Never looked into the eyes of a child who worshipped him. He wouldn’t have missed that for anything the first time. Or the second. Tom turned slowly to look at Kaed, the leaves of the elm tree patterning the filtering moonlight across his face. “You think that cause you’re young, Kaed. Twenty-nine ain’t forty-three.”

“Forty-three ain’t dead, Tom. There’s plenty of women out there. Plenty of land. Room to spread out. What’re you grinnin’ at?”

Tom laughed aloud. “Got any particular woman in mind?” Quickly, he added, “Now, remember, Kaed. She’s gotta be young enough to give me a baby, but not so young she’s a baby herself. Gotta be easy on the eye, and I want her to look at me like your Jessica looks at you. And by the way, have you got any idea where a fella could get a piece of good land for raisin’ cattle, with a little patch for farmin’?”

Kaed’s lips twitched. Tom was dreaming, but only half dreaming. The serious half had taken root in his heart and mind. Kaed knew before too much longer, that part would eat away at the lightheartedness until it took over completely, becoming a bold, unshakeable dream that he would do his utmost to accomplish. Now that Tom had envisioned what his life could be, Kaed knew it would fall to him to help make it a reality.

“Let’s end this business with Fallon. After that, we’ll find the land and the cattle.”

“Don’t mean nothin’ without the woman, Kaed. You oughtta know that.”

“I do.” Kaed smiled, his thoughts straying to Miss Amelia Bailey, the not-so-young-but-young-enough school teacher in Fort Smith, who always seemed to trip over her words when Tom Sellers came around. Just the right age. And very easy on the eye. “Stick with me, old man. I may even help you find a decent woman to settle down with.”

A native Oklahoman, I've been influenced by the west all my life. I love to write short stories and novels in the historical western and western romance genres, as well as contemporary romantic suspense! Check my Amazon author page to see my work: http://www.amazon.com/author/cherylpierson
I live in Oklahoma City with my husband of 40 years. I love to hear from readers and other authors--you can contact me here: fabkat_edit@yahoo.com
Follow me on Facebook: http://www.facebook.com/cheryl.pierson.92
https://petticoatsandpistols.com/sweepstakesrules