I’m a farm girl. Maybe that’s why writing westerns feels so good to me – I understand that soul-deep link to the land, I understand being at the mercy of Mother Nature and I know for certain that growing up on a farm is responsible for my work ethic.  Work hard, treat people honestly, be a straight shooter.  Everything else just kind of looks after itself.

There’s a problem though.  You see, even though I grew up in a farming community, and those oh-so-interesting smells were for the most part pleasant ones (except hogs and when people spread chicken manure, P.U!), I didn’t grow up with livestock.  My family were apple growers.  And I could go on at length about apple blossom time and pruning and how much I loved harvest time…

But I won’t. Because today I’m going to talk about haying.

I’m almost ashamed to admit that I’ve had to research haying a little bit.  Equipment has changed over the years, and my memory fades a little. I found it quite interesting, actually.  I looked at pictures of different kinds of balers and rakes.  I read about drying times before baling and different types of bales and the advantages of each.

Where I grew up, most of the farmers made the small, rectangular bales but when I moved out west to Alberta, mostly there are the huge round bales and sometimes a new shape – bigger square bales.  I always kind of wondered the reasoning for the round bales, actually.  At home in Atlantic Canada, you hayed, you made small bales, and you brought the bales back to the haymow.  You never left them in the field.  With the large round bales, you have more hay with a smaller surface area so it protects from the elements, meaning you can leave the bales in the field.  There are coverings too.  Some that leave the ends open, protecting the surface but allowing airflow so they don’t ferment, and complete wrappings that allow the bale to become silage – rather than using a silo.

So I learned some interesting stuff about the process that I either didn’t know or had forgotten.

All that comes in handy when writing.  For instance, in the last book I handed in, my hero is rushing to get the first cut done and baled before the storm that is forecast hits.  That research was pretty useful figuring out how things would play out on a time scale.  I love that when I’m writing, I can manipulate the weather to suit my needs, by the way. 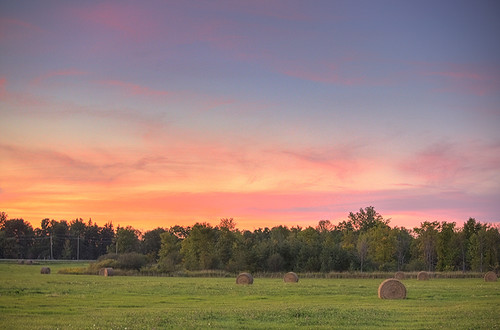 But there’s another component to haying that has nothing to do with function.  There are feelings.  It sounds funny, I know, but the feelings needed no research at all. For that I just drew on my own memory.

When I was growing up, our neighbours hayed and I remember lots of evenings seeing the wagons loaded with bales make their way into the farm yard.  They were loaded on to a chain-operated conveyor belt and stored in the loft.  Quite often this was in the hazy, hot evenings of July when the sky was pink and purple and the air smelled like clover and fresh cut grass.  There is something so satisfying about a harvest gathered in and even as a young child I could feel that.  There’s also the sinking feeling of dread when you see the storm clouds roll in, and you hold your breath praying there will be no hail.

But by far my favourite memory is sleeping with my window open, and hearing the drone of the hay dryer (a huge fan) at the barn next door.  Rather than disturb, it always lulled me to sleep.  That hay dryer meant that the hay was inside, safe and secure for the next year.  It meant it was summer, and school holidays. In some ways, having that hay dryer on meant everything was right in the world.  And I kind of like how when you’re writing, it’s the personal feelings that give your research context.  How facts can work to reveal character.