Happy ever after … a story at a time!

Hi y’all and thank you for inviting me to stop by your site for a visit today! I Love This Bar (Sourcebooks, Inc.) came out the first of the month and is now on the book shelves. It’s definitely modern day petticoats and pistols with a sassy bar owner and a rancher who falls in love with her.

I Love This Bar is the first in the Honky Tonk series with three more to follow before the end of the year: Hell, Yeah (August), My Give a Damn’s Busted (October) and Honky Tonk Christmas (November).

The Honky Tonk is an old weathered-wood saloon in Mingus, Texas. If the walls could talk they could tell tales that would put a whole new slant on the history in Palo Pinto County. It’s been there the better part of half a century and like Toby Keith says in his song, “I Love This Bar,” its has a quirky cast of losers, boozers, yuppies, blue collar boys, rednecks, dancing girls and hookers, a big bouncer man and dumb-asses.

When I Love This Bar begins Daisy has been the bartender/bar owner/vet-tech enough years to have seen all of the folks mentioned in the song and her love for the bar runs deeper than just liking her job. She has absolutely no notions of changing one bit of her life until Jarod swaggers into the Honky Tonk in his tight fittin’ jeans, ten gallon hat, boots and enough sex appeal to give her a case of acute hot flashes.

It doesn’t help that they collide in the middle of the dance floor and the fall puts him right on top of Daisy:

All the air escaped Daisy’s lungs in a whoosh and when the cowboy collapsed on top of her body. She sucked in air and pushed at the weight but her arms were pinned. She opened her eyes to see a head full of dark hair and felt the sharp bone of his nose pressing into her left breast.

He moaned or mumbled something. Her breast muted whatever it was.

Thank God he’s not dead; she thought when he rolled to one side.

He raised his head and looked over at her, his face only inches from hers, his eyes zeroing in on her lips.

Hot damn! That’s one sexy face, they both thought at the same time.

I’m not sure any woman could look up and find a sexy fellow like that (Go take a look at the front of the book) stretched out on top of her and not have an acute case of hot flashes. And so begins a ride on an emotional roller coaster that has them both panting and dizzy. The regulars at the Honky Tonk, plus Jarod’s Uncle Emmett with his smart mouth and manipulating ways, fuel the fire that keeps the roller coaster going at break neck speed. Daisy has to learn to trust; Jarod has to convince her he’s trustworthy.

Grab your boot scootin’ britches, pick up I Love This Bar and visit the Honky Tonk. And when you finish the book go on and read the first pages of Hell, Yeah at the end because it’ll be on the shelves in a few weeks!  Tell me, if you could meet Daisy or Jarod in person, what would you like to ask them?  (Quick! Think of something; Carolyn’s giving away two copies of her exciting new book to two lucky responders!)

Carolyn Brown is an award-winning author who has published 36 historical and western romance novels for the library market, many of them bestsellers in that market. Born in Texas and raised in southern Oklahoma, Carolyn and her husband now make their home in the town of Davis, Oklahoma. For more information, please visit http://carolynlbrown.com/

I Love This Bar 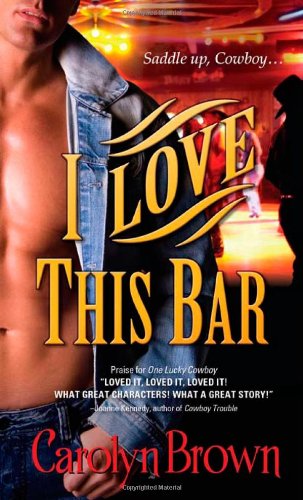 She doesn’t need anything but her bar…

Instead, Jarod McElroy, finds one red hot woman. She’s just what he needs, if only he can convince her to come out from behind that bar, and come home with him…