Guest Blogger
Behind the Book, Women in History
31 Comments

In a scrapbook I have from my grandmother is a clipping from the Sunburst Sun (Montana) newspaper, Aug. 26, 1922, that reads:
Program
1:00 Parade of cowboys and cowgirls, headed by Cut Bank brass band
2:30 Tootsie Bailey will enter competition with entire field, riding wild steers with only one hand on cirsingle

Another clipping states “Tootsie Bailey won first and Mary (Marie) Gibson second prize in the steer riding.”
Marie Gibson was a well-known Montana cowgirl and won national awards for bronc riding.
Tootsie was my grandmother and she would have been 17 at that time. I did have the opportunity to spend time with her, ride horseback, and get to know her pretty well before she died suddenly when she was only 57 and I was 12.

I know that she was an avid horsewomen and that she was more at home on the back of a horse than behind a dust mop. My dad told me she had competed in rodeos, riding steers, when she was young. I kept thinking how courageous that was, especially as I got older and watched bull and bronc riders. Grandma was petite—five-feet two-inches and weighed a little over 100 pounds. I was amazed that she would pit herself against an animal that weighed 900 pounds or so, one whose sole purpose was to get that pesky rider off its back and then maybe stomp on her! 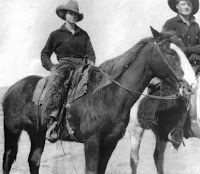 While my grandmother most often dressed in men’s jeans and did a man’s job, riding horseback and working cattle, she also “cleaned up nice” and dressed very feminine and fashionably when she was in social situations.

Following is an excerpt from Cowgirl Dreams when my character, Nettie, donned a pair of her brother’s denim pants, sneaked out of the house one morning and rode in a neighbor’s informal rodeo. She loved the freedom of riding her horse Toby, wearing pants and especially riding the steer in the rodeo. The adrenaline of staying on the back of that bucking, twisting, angry beast had her hooked and the clothing allowed her to ride unencumbered by the extra fabric of a skirt, divided or not. (I don’t know that my great-grandmother was as opposed to her daughter’s rodeo riding as my character’s mother, but I know, from research, that it was often a family issue and a social stigma.)

When Nettie arrived home, her mother was horrified to see her daughter dressed as a man. And having heard that Nettie had ridden in the rodeo against her wishes, Mama was highly upset.

“You.” Mama stepped forward, her face dark red with anger. “You defied me.” 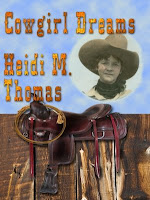 “Young lady, you were supposed to stay home today. Work on that pile of darning. You know Mrs. Connors wants it done by tomorrow, otherwise we don’t get paid till next week.”

The darning. She hadn’t given it another thought after she’d decided to sneak out. Oh dear. Icy prickles of guilt stabbed at her. “But. Lola. Why couldn’t she finish it?”

Mama stepped closer. “And, we had to hear it from the neighbor’s hired man. You. Rode. In. A rodeo.” With each word, she jabbed her finger an inch from Nettie’s face. “You know how I feel about that.”

“Don’t you sass me, girl.” Mama’s voice shook now. “And wearing pants in public, too.” She closed her eyes a moment and sighed. “You will take that basket of socks, go to your room, and don’t come out until they’re all finished. No supper. No No riding. For a month.” She turned on her heel and stalked out of the kitchen.

And join me tomorrow at L. Diane Wolfe’s Circle of Friends blog http://circleoffriendsbooks.blogspot.com/

For the itinerary of all my stops on this tour and a list of prizes, go to my blog http://heidiwriter.wordpress.com/my-blog-tour/